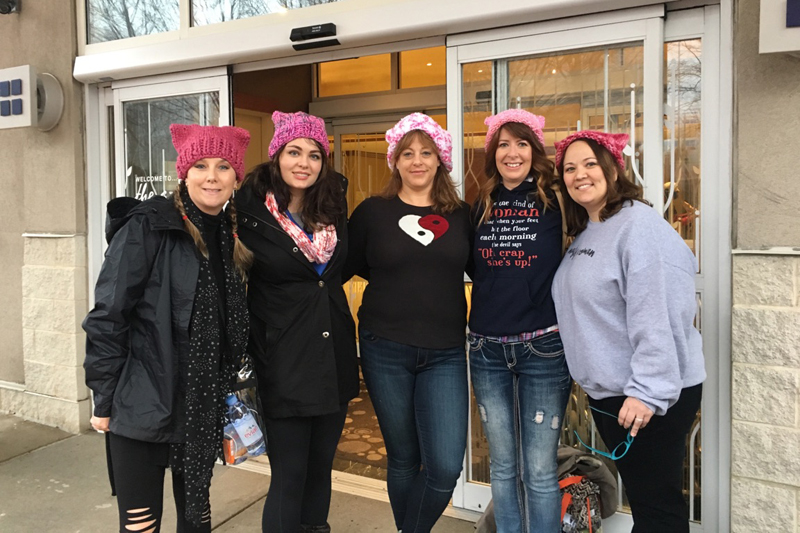 I stood on the metro, scrunched up against scads of women wearing myriad variations of knitted pink hats with ears, and gulped breaths of air – nearly hyperventilating – and thinking I really needed to get out amongst human beings more. Swirls of neon pink, baby pink, pink bordering on purple, and dusty rose blended together, as strangers stood so close together their chests were actually touching, boob to boob. I clutched the hand rail and tried my best not to knock into those closest to me, as the train stopped and started, started and stopped.

A woman sold buttons for $3.00 with Shepard Fairey’s artwork on them, and she twisted like an Okie funnel cloud to reach her buyers. I figured she must do yoga. I bought one for me and my best friend who stood a dozen people away. I stood on my tip-toes to see her variegated pink hat, relieved that she was there.

I was nauseous and willed myself to breathe more normally. I knew it would help. I stood shoulder to shoulder with a man wearing a hat his wife had made for him. I watched as she threw her last knitted creation to another lady a few feet away who didn’t have one. The energy was one of celebration, hope and excitement, but the smell of cramped bodies gave away a touch of nervousness, too.

I decided that conversation would assuredly make me feel better. “Jeez, I can’t help but think of the packed trains that traveled to Auschwitz,” I said to the man, hoping my breath wasn’t too strong with coffee. I instantly regretted speaking what was knocking around in my mind, as I knocked into my train neighbors. He sort of smiled, but not really. I kept silent for the remainder of the ride.

We finally arrived in D.C. and I cursed the coffee I’d consumed and told my march mates I needed to find a bathroom. Our group of five passed two Porta Potties with lines I couldn’t quite see the end of. We’d have to wait.

The next set of two Porta Potties were the same as the last, and we kept walking. Surely, the organizers had planned for women’s restroom habits? There’s always a line for the women’s restroom. Always. Even at a random Chevron station in Punxsutawney, PA.

The third set of Porta Potties were more of the same, so when we came upon a lone Potty, we decided we’d best stand in line. An hour and a half later, we’d only made it halfway. I crossed my legs as my best friend, Monica, busted out the empirical evidence and told us that our restroom would be full by the time we got there.

There wasn’t another bathroom in site, and the crowds were getting too thick to move. Uncertain, we remained in line as it snaked slower than cold honey. A tiny woman with short dusty brown hair bounded up to her friends in front of us and told them she’d peed in the bushes and that there was a blockade of women standing by to protect pee-ers from passerbys. She certainly seemed lighter.

I didn’t hesitate. I’m from the west and come from hardy hillbilly stock, after all. Most of my group held back, asking me to tell them how it worked out.

It worked out just fine, thanks very much. After we’d all relieved ourselves between a slab of cement, a row of bushes and said blockade of beautiful strangers, we made our way about twenty feet to stand in line for the march. We couldn’t hear the speakers, just a jumble of noise.

We stood for a few hours waiting for march time at 1:15, and inched our way to the left as we could, so the building wouldn’t block the sound from the jumbotron. Eventually we began to hear the speeches. I was as clueless as I’ve always been. Alicia Keys sang “Girl on Fire” and I had no idea it was her. It was reminiscent of my 19-year old self asking when Judas Priest was coming on even after they’d been playing for half an hour. ‘Course, I may have been on the Giggle Smoke back then. Okay, fine. I was.

1:15 rolled around and I was starting to hurt. The combination of the 50 degree weather, the cold cement, and my arch-less tennis shoes were getting to me. I was more than ready to march. But they announced another speaker.

But our cries went unanswered.

With each new introduction of a speaker, the crowd groaned, scowled, and complained to whomever they were with. I was in so much pain at this point I could barely stand. I figured it must just be my rheumatoid arthritis and the chilly air getting to me. My lower back was on fire, and my legs burned. My pinkie toes were so numb I wondered if they were frostbitten. But, that was ridiculous, it wasn’t cold enough for frostbite.

I realized as women started leaving that they were in pain, too. I wasn’t just being a pussy (pun intended.) Elderly women walked by holding their lower backs, with winces on their faces. Many held back tears as they left the march before we’d walked a single step in protest.

2:45 rolled around and they announced a surprise guest – Madonna. She came on stage in a black cat hat, her blond curls light against the dark, but there was movement like a rolling and an opening up. People had started marching – without fanfare, without fuss, without permission to begin. It was as if they had no choice but to move like cattle in a blizzard. I couldn’t have stopped my own legs if I’d wanted to.

Now, it might sound as if I’m complaining about being at one of the most monumental events in history. Don’t get me wrong…it was magical, unforgettable and beautiful to stand with so many, and I’m honored to have attended.

Allow me to explain as best as I’m able. Imagine 500,000 women from all over the world who’ve come together in solidarity, sisterhood, and even brotherhood (for all the men who attended.) Imagine that there is this HUGE energy of excitement. Each person in the crowd felt called to be there for very specific, very personal reasons. I was marching because I wanted to show President Trump that I stand with women, and we will not go away, nor will we allow ourselves to be treated inhumanely. We’ve come too far, even though we have further to go. Monica, on the other hand, marched predominantly for the environment. Truth be told, we each had a number of reasons.

But, imagine that every human being standing there had this incredible energy and intention behind their effort to show up, and then imagine that the march became not about the 500,000 people gathered en masse to march, but rather about those who were chosen to speak up on stage. Further, imagine that people are in incredible amounts of pain, even the 23 year old girl I was with had tears in her eyes from her leg cramps. Then imagine that our fervent cries of “Let us march” went unheard.

It was bound to happen. All of that brilliant energy deflated like the blimp in the middle of Hurricane Helga.

By the time we started following whoever the first blessed soul was who just began to march without waiting for the go ahead, we found the five hundred-ish bathrooms we’d been blocked from. I was walking like Quasimodo by this time. Limping. Stiff. Hunched over, and trying to keep up with my group.

The energy did rise again, though. After people were able to move and shake out the stiffness, the feeling of sisterhood and solidarity was back in full force. Women yelled “We want a leader, not a creepy Tweeter,” and “Welcome to your first day, we will not go away.”

A woman who surely must have been a soldier screamed, “What does Democracy look like,” as the crowd answered, “This is what Democracy looks like.” Kids rode on their parent’s shoulders, and a swat team ran against the current to get to Trump Tower where people were dropping their signage.

As Monica and I drove back to Atlanta the next day, we reflected on the beautiful and the painful and came to the conclusion that perhaps the Women’s March on Washington wasn’t meant to be painless. Perhaps standing up for what we believe in has its pain, too.

Maybe, just maybe, it wasn’t meant to be comfortable and full of only excitement and joy.

And now that I’m home and have been witness to Trump’s first days as President, I feel more strongly than ever that amidst this darkness, there is light, too. But, also, amidst this power there is pain. I’m certainly feeling it. The march set me up for it, in its own way.

And now I’m just trying to figure out how I will balance myself. How much pain I will endure, and when will I allow myself to take a fucking nap?

Too many days have found me wholly wrapped up in politics – watching this horror story with incredulity and shock, to the point that I’ve gotten nothing done.

My questions to myself are how can I take inspired action without losing myself and what choices feel like love? The march felt like love. Donating to the ACLU yesterday felt like love.

Standing up for the rights of myself and others feels like love.

I’ve spent the bulk of my life ignoring the news and politics altogether. I hate politics. I’ve even written about it. But, that doesn’t feel like love to me this time around. It feels like fear and reminds me of the Germans who buried their heads during the holocaust as their very neighbors were taken away. Yeah, it always comes back to the holocaust for me. I don’t know why it knocks around in my head the way that it does. It just does.

I think the answers to these questions – how will we balance and what feels like love – is personal for each of us, but I’d so love to hear your thoughts, tips and advice. Whatever you’ve got.