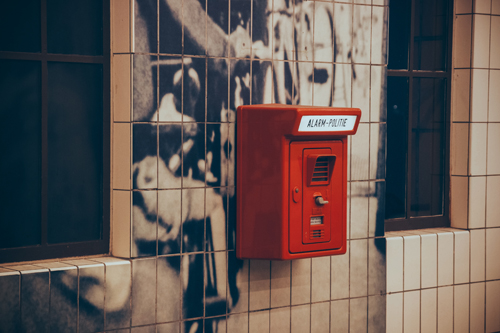 I don’t want to freak you out or anything but God has been speaking to me through my fire detector.

Some people have vivid, colorful dreams of weathered hermits riding royal purple Yaks and wake up feeling inspired and motivated around their life purpose. Others make an omelet and see the face of Jesus in the burnt, crusty bits of Gouda and head out on a pilgrimage. Moses had the burning bush.

But, nope. Not me. I have a Kidde fire alarm.

Two weeks ago, after a particularly grueling work week, I grilled some asparagus, unwrapped a couple of Nerd Ropes and headed up to bed to watch reruns of Sex and the City. As soon as I pulled the covers down and plumped my pillows I heard a shrill voice scream, “BATTERY POWER LOW!”

I ignored it and pushed play on one of my favorite Sex & the City episodes called “The Ick Factor”- my television version of true love.

I turned up the volume.

Annoyed, I got up and tramped downstairs to shuffle through my junk drawer only to discover I was out of 9 volt batteries. Needless to say I tried, unsuccessfully, to sleep that night to the wailing of “BATTERY POWER LOW” every fifteen minutes until morning while issuing expletives of my own every sixteen minutes. So-Kr8z, my beloved Yorkie pup, just lay on my forehead, trembling till dawn.

I went out first thing that next morning, bought a battery, spent 1 ½ hours trying to figure out where it went and how to change it, (all while standing on a stool, reaching for the heavens of my ceiling, pulling neck muscles, and cursing.)

Fast forward to three nights ago.

Asparagus in hand, Carrie Bradshaw taking a “luvvvvah” on my 40 inch, and So-Kr8z by my side, my nemesis screamed, “BATTERY POWER LOW.” It was so loud I sucked my purple Jersey cotton t-shirt sheets half-way up my ass and The Kr8z jumped three feet and right on over my lemon zested perennial dinner.

Then it struck me.

MY battery power was low.

It wasn’t my fire detector. It was me. I was drained. God was giving me a warning, and a shrill one at that. In the past few months I’d moved, tried to find time to unpack a few boxes a day, taken on a few additional clients, spent time training my team, attempted to keep up with cleaning my new house, looked for time to make dinner, and all the while still healing, internally, from a cancer scare and the removal of my thyroid.

I took note, thanked the Divine for the reminder that self-care needed to be a priority in my life, and shoved a pair of earplugs deep into my ears. The next morning I called my home builder and asked them, very nicely, to “get thee f*ck to my house posthaste and fix this wonky fire alarm.” (My builders love me.)

Same day a cute boy with a big ladder knocked on my door and, like a Wise Man bearing a gift of gold, brought me a new fire alarm. While he installed it I told him my theory about God speaking to me through my fire alarm which appeared to give him a bit more pep in his step and in three minutes the job was done and he’d sped down the road. I sat back down to work and. . .

So-Kr8z jumped in my lap, shivering. I have to say, by this point, I was shivering myself. Okay, so I hadn’t actually been incorporating the self-care. I’d acknowledged it, yes, but I wasn’t doing anything differently. I was still sitting at my desk for six hour stretches, eating Kashi Almond Flax bars to sustain myself before my next six hour ass-in-chair time. I was still heading to bed with my asparagus stalks and Nerd Ropes to drone out for a few hours before bed. The Universe was still raising the alarm because, while I was physically listening, I wasn’t actually listening. I certainly wasn’t taking heed.  Imagine if Moses had ignored the burning bush. Back then Smokey the Bear was but a glint in his 27th Great Grandbears’ eye. That mountain, and Moses, would have been ablaze.

I called my saint of a builder back and cried, “It’s still happening. HELP!”

Twenty minutes later a second cute boy arrived. (I don’t have the faintest notion why the first boy didn’t just come back.) Cute boy #2 made some adjustments to the new alarm, tested it, waited with me in complete silence for fifteen minutes to ensure it was fixed while I went about explaining the complex theory of Murphy’s Law and tried my best not to emotionally vomit on him (even though it’s not every day that God speaks to folks through appliances.)

Convinced all was well, he left.

It continued all night and I just didn’t have it in me to call any  more cute builder boys. I had pulled a 14 hour workday and my internal battery was past low. It was leaking acid. I called my brother crying hysterically while trying to disconnect the f*cking thing altogether. My brother talked me down off the stool and I stood there holding the battery in one hand and the contraption itself in another. We hung up. I sniffled.

I pleaded with the Universe, “Fine! I get it! I’ll start going for 20 minute walks every day. I’ll take bubble baths. I’ll eat a full meal minus the Nerd Ropes. I’ll meditate. I’ll write. Just make it stop.”

Wait! No way! I’m holding the little bastard in my hand. There’s no battery. It’s not connected. The little colored wires are dangling from the ceiling. I look from one hand to another and I freak. I allow myself to have a complete and utter breakdown. So-Kr8z is huddled under the couch, shaking, though I’m not sure if it’s the alarm or me that’s scaring him.

But the noise isn’t coming from my hands. Oh my God! My dear, sweet God. There’s another fire alarm in this house! I run up and down the stairs searching all three floors, clutching the warm Duracell and the disconnected alarm. I find the second of God’s voice boxes up by my bedroom.

I get it. I’m listening.

The Means to Flush

Auld Lang WHAT? On Friendship
7 replies