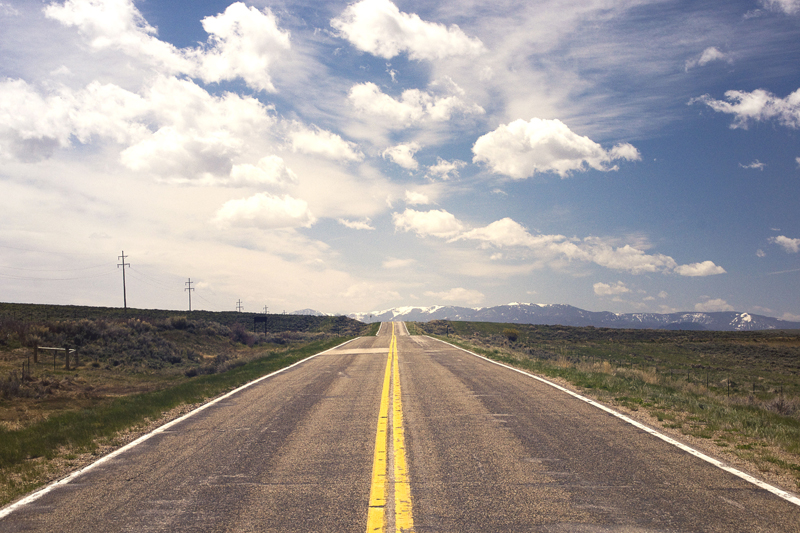 I’m hurtling down WY-220, my knuckles white from my death-grip on the steering wheel, though I’m still managing about 80 MPH. The melamine plates are rattling in the cupboard, and I’m fairly certain that the butter is stuck to the inside of the door above my little sink. Up ahead I see a mile-long line of stopped cars snaking up the hill. I brake early to account for my load before coming to a stop behind a truck hauling a huge water tank on the back of a trailer.

The road snake doesn’t slither. Not even an inch. After about fifteen minutes, I turn off the engine and get Chloé and So-Kr8z out of their car seats to take them outside. As soon as I pull the latch, the Wyoming wind pulls wildly on my RV door and slams it open. I coax Chloé down the stairs and see that the line has grown at least a mile behind us too. She won’t go. Too many eyes, I imagine. I put her back inside and grab So-Kr8z, who goes on every single, solitary weed, his leg lifting so high I worry he’s going to tip over and get covered in sticker burs.

Back inside, I watch the guy in the water truck ahead of me. He gets out to stretch his legs, pulls a fly pole out of the bed of his truck, and practices his cast over the shimmering blacktop. Because he looks like Yukon Cornelius of Rudolph the Red-Nosed Reindeer fame, and not a serial killer, I get out to talk to him. I pelt him with questions: What does he think is going on? Where’s he headed? Does he think we’ll be there long?

He tells me there was an accident up ahead the week before that took over five hours to clear. He says his buddy is a few cars behind us and they’re heading to work on an oil rig. He says he’ll give it a bit. He flips the fly line into the wind, unfazed, and a guy skateboards up the hill toward us. I feel like I’m on a road trip ala Hunter S. Thompson, sans acid. It’s his coworker. He tells us he’s going to ride to the top of the hill and see what we’re dealing with. I watch him pump up the steep grade of the road, his right leg working hard. Before long, he’s sailing back down. Fast. His arms are outstretched and his long black hair is flowing sideways. He says the line is miles and miles long, he can’t even see how far. He suggests that they turn back toward Casper and cut through Medicine Bow.

I ask how far Medicine Bow is. I admit that I’m new to RV life and I don’t know how long my gas will last. I wish out loud that I’d filled up in Casper. And I’m worried about the dogs. It’s so hot that it’s hazy in the distance, even with the wind. The skateboarder tells me I can follow them. It’s only about an hour out of the way and will lead us straight to I-80 near Rawlins. I can get gas there. I feel vulnerable, scared, and completely unsure of what to do. I’ve traveled the roads of Wyoming my entire life, but I’ve never heard of the road they’re talking about. I try to picture where it might be, but I have no idea. And, Yukon Cornelius aside, I don’t want to end up dead. Plus, the skateboarder is covered in tattoos.

I get in my RV, back up so the water truck can make the turn, and I follow him. As I bump over the bar ditch, I know the butter is toast, and the bungee cord that’s keeping my bathroom door closed stretches so that the door opens and then slams shut. His buddy pulls out in front of us and we form a convoy, barreling past the miles of cars and semis previously parked behind us.

As I travel into the Unknown, it strikes me…the whole of 2017, from the beginning of January to this hot and windy day on August 28th (a day after my forty-seventh birthday,) has been a venture into the unknown; an exercise in white-knuckled, hurtling, rattling, 80 MPH, butter-smearing bravery. Trips in trust. From Pennsylvania to Atlanta to Washington, D.C. to Wyoming, back to Pennsylvania to Boston to Cape Cod and back again to Wyoming, with hundreds more miles logged across the expanse of Utah.

I’d stormed to the bedside of a beloved man in my life to hold his hand while he took his last breath. I’d gone to D.C. with my best friend and hundreds of thousands of women to march until I thought I would buckle from the pain of it. I’d journeyed to defend my thesis after a process that nearly broke me as a writer. On the day I returned home with my M.F.A., I got a call that my dad was going in for emergency surgery. I swapped suitcases and went to him, and for six weeks I lived in my RV and drove to his place to take care of him. Daily he told me that he was “ready for the reaper.” Only when I’d secured his care did I return home. I walked in the front door with a bag full of dirty clothes only to end my five-year relationship with my partner. He moved out the same night.

And now here I was on a two-lane back road speeding toward Medicine Bow behind a couple of oil-riggers I didn’t know, Burl Ives tunes humming in my head, praying I didn’t run out of gas, and fully trusting that I was where I needed to be, even if I didn’t know where I was.

I didn’t run out of gas. Literally or figuratively. Some three hours later we arrived at a gas station about thirty miles from Rawlins where I thanked these two chivalrous men, and we hugged and said our goodbyes.

2017: The year of perilous adventure—breathtakingly beautiful, bumpy, and back-breaking.

What can I say after having been away from my blog for a year? Only that it was a time of intake and not output; that I was logging life miles; that I was listening and not talking. Somehow, I needed those 20,000+ miles. 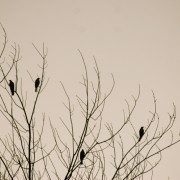 Who is Your Ideal Client? (You Might Be Surprised…)
18 replies