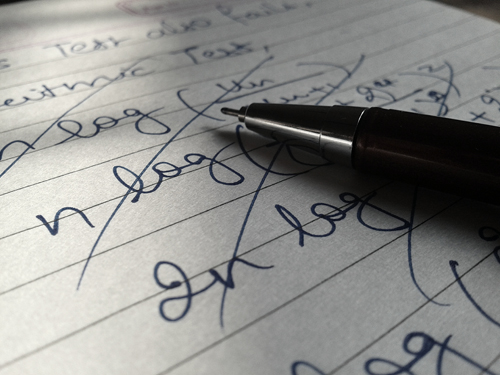 I’ve been working on the same novel since 1999. Let me do the math for you. That’s sixteen years, folks. Now, mind you, I wasn’t “applying ass to chair” every day of those sixteen years. I took a five-year hiatus to drink my face off in Cleveland, for example. I was on break during my divorce and moves back and forth across country. I was definitely on leave during my five surgeries.

When I look back with my hindsight goggles, however, there weren’t many days that went by when I wasn’t thinking about my story and my characters. (Okay, perhaps while plugged into the morphine drip, but otherwise, yeah, I was writing in my head the whole time.)

On paper, I had written 224 pages of my trilogy. One day last fall I decided it was time to get back to it. (I’ve often wondered if I had a whole lot of living to do before I could tell this story.  I think there’s real truth there or, at least, that’s the story I’m sticking to.) Suffice it to say, I signed up for a master’s program, trashed my glorious 224 pages, plus notes, and started over on draft number two which, in essence, is really just another first draft because, just like me, my beloved novel had changed. I’m 128 pages in this go-round and, holy hell, is it awful.

Disclaimer: My “glorious” 224 pages were awful too. A complete and utter heaping pile of bat dung.

I’m not being modest.

The state of my second attempt at a fecal first draft has me pondering the brilliance of Anne Lamott and her concept of the “shitty first draft.” I haven’t read “Bird by Bird” (my favorite writing book of all time) for years, but I’ve used the term “shitty first draft” a billion times since then in my writing coaching. I’m not going to try to recreate Anne’s words or write them in my own voice because you just shouldn’t fuss with perfection. Here’s what she has to say:

“…shitty first drafts. All good writers write them. This is how they end up with good second drafts and terrific third drafts. People tend to look at successful writers who are getting their books published and maybe even doing well financially and think that they sit down at their desks every morning feeling like a million dollars, feeling great about who they are and how much talent they have and what a great story they have to tell; that they take in a few deep breaths, push back their sleeves, roll their necks a few times to get all the cricks out, and dive in, typing fully formed passages as fast as a court reporter. But this is just the fantasy of the uninitiated. I know some very great writers, writers you love who write beautifully and have made a great deal of money, and not one of them sits down routinely feeling wildly enthusiastic and confident. Not one of them writes elegant first drafts. All right, one of them does, but we do not like her very much. We do not think that she has a rich inner life or that God likes her or can even stand her. (Although when I mentioned this to my priest friend Tom, he said you can safely assume you’ve created God in your own image when it turns out that God hates all the same people you do.)”

Here’s the rub… As I re-read those words I realized I really did think I would get an exemption. A hall pass. An official letter that said, “Hey, you’ve read thousands of books in all the genres, you’ve taken every writing course known to man, you went for a bachelor’s in creative writing and now you’re working on a master’s in the same vein. You’ve studied all the craft books. You’ve been blogging consistently since 2009. You go ahead and write out your brilliance on the first take.” I quite literally believed that all of those logged hours of writing, reading, studying, and helping folks to birth their own books, would mean I was off the hook for the “shitty first draft.”

But in knowing this concept inside and out, what strikes me most is what a hard time I give myself over my crappy writing. I mean, this is my work in the world. I give writers permission to write their own shitty first draft every single day. I profess it like a mantra. I’m sure my clients would like to bash my head in sometimes. I also give writers full autonomy to write what comes and I advise them to keep the creation process wholly separate from the editing process so their inner critic can’t raise its ugly head so often, or so harshly. And their books are born that way. Yet somehow, I assumed that my book baby would rush out of my creative center devoid of mucous, cooing happily, and without the cone head.

What an idiot. Or not… How can I say yes to a shitty first draft? Well, for one, I know what I want my book to be and I know it’s not there yet. That is beautiful, people. Enough cannot be said about that inherent knowing of how you want your work to be in the world; of how you see it in its future incarnation; of how glorious is its potential. That’s where all my logged hours of reading and study comes in. I know what makes up a good book, for me, and I know I’m not there yet. So I get to sit, draft after draft, and clean off the slime. If I didn’t enjoy the process so much, I’d take up nail filing or something.

Regardless, I don’t get a hall pass. I don’t get an exemption certificate. No letter is coming anytime soon. I get to sludge through every gaping hole in my plot. I get to tackle every character detail disconnect until I know my characters as well as I know myself. I get to swim upstream through my passive voice and my cloyingly annoying adverbs and -ing words. <— See what I did there?

[tweetthis]No writer gets a hall pass excusing them from writing a “shitty first draft.”[/tweetthis]

Except that one woman Anne mentioned. 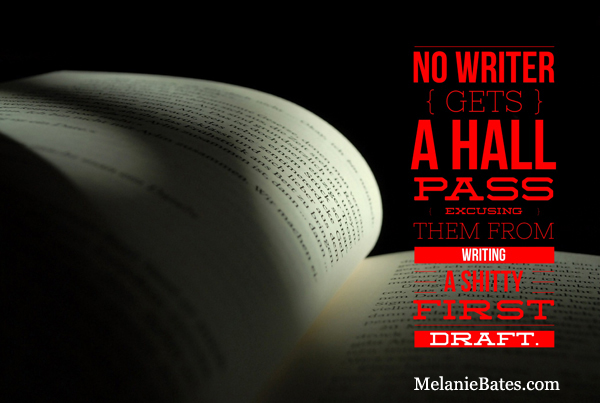 The Rollercoaster of Life
6 replies